How do you as a front line leader, cool people down when they’re having an emotional or heated argument?

Sometimes front line leaders struggle with knowing how to deal with two employees or team members who are having a heated argument.

Being in a hot work environment, where people are working long hours and doing strenuous work, can wear on your team. That stress, combined with things that might be happening outside of work, can get the better of people. Occasionally they might trigger each other into an argument.

The actual reason for the argument might not be that big an issue, but they get really, really upset. It’s even more evident to you as a leader when you see the emotional reaction, which often has very little to do with the actual underlying issue.

Here’s how you can regain control of that situation and then help rectify it.

Remember, when comparing logic and emotion, which one is stronger? Logic is always subservient to emotion. Emotion trumps logic every time. When people are emotional, you can’t use logic because it won’t have an impact on them.

Handling conflict is perhaps one of the most difficult things a front line leader needs to do, but when it’s done properly, your team will benefit greatly from it. Click To Tweet

Let’s assume that you take the two people who are arguing and separate them. Even though you’ve separated them, they might still be angry and decide to rant to you. And you know what a rant is – it goes on, and on, and on, and on.

If you do, it will continue many, many times longer than if you just let the person rant it out.

Most people can’t rant for more than two to three minutes. You’ll find that once they finish their rant, they take a breath, they pause. In the cases where they don’t stop on their own, say their first name three times, “Joe… Joe… Joe.” Usually by the third time they ask, “What?” Then you say, “Now that I’ve got your attention, here’s what I hear you telling me.”

You then recap what they said.

“It sounds like what happened was that Bill went into your toolbox and took some of the tools out of it and you didn’t like that. You think that he does that all the time. That he does it to get at you.”

You’re looking for that person to go, “Yeah, that’s right. You know, that guy doesn’t care about me. He just takes the stuff and uses it whenever he wants.” 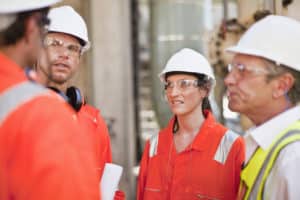 By empathizing with him and reflecting back what he told you, he’s going to notice that you are listening.

Now you could say, “Do you mind if I offer you a suggestion that might help solve this in the future?” Or, “What do you think would work to solve this in the future?” Be careful, though, because he might say, “Well, if Bill wasn’t such a jerk then everything would be fine.” But you want him to be thinking, “Hey, I can’t affect how Bill is as a person. Let’s talk about what we can do to make this situation better.”

A Word of Warning

As a leader, be careful that you don’t agree to a solution that you really can’t support.

For example, if he says, “Well, I never want to work with Bill on the same shift” that’s not something you want to agree to because that will affect your scheduling and flexibility.

You’ll need to suggest other solutions. You might need to have the same conversation with Bill. Try to get them to come together with an agreement as to how they’re going to get along. Remember, they don’t have to be best friends, and they don’t have to love one another. They just have to look out for one another in terms of safety and make sure that they’re collaborative as a team.

Once you get their commitment to do the behavior change, then things should get better.

Conflict doesn’t always go from extreme to zero. Sometimes there will be little outbursts that happen on an ongoing basis, so don’t view it as a one and done scenario. Just observe what’s going on, make sure that they’re getting along better and, if they flare up again, you’ll probably have to take them aside. You might even have to lay out consequences that, if it continues, it could result in disciplinary action.

Handling conflict is perhaps one of the most difficult things a front line leader needs to do, but when it’s done properly, your team will benefit greatly from it.