Dealing with Worker to Worker Accusations

How should you as a leader, deal with worker to worker accusations?

What happens when one worker tells you something that another worker might be doing?

This can be a touchy situation for many leaders because the informant likely wants you to take action and say something to another worker, however, you may not have actually observed the behavior they are commenting on.

This puts you in a tricky spot. If you approach a worker and say, “It’s come to my attention that you have been doing this”- it might not sit well with them. They might start thinking about how to get even, rather than owning up to the situation and making a positive shift in their behavior.

Here are three tips to navigate these situations.

The first tip is to determine the seriousness of the situation.

If it turns out the accusation being levelled is serious like theft, assault, harassment or bullying, you have a responsibility to act on it as a leader, even if the informant isn’t willing to come forward. Now that it’s been brought to your attention, you have to start an investigation and rectify it.

If it turns out the situation is more of a nuisance or annoyance, you will have to take the information under advisement and try to observe it for yourself before taking action.

The second tip is to observe the behavior.

If something is brought to your attention, you need to be visible in the workforce to observe what is going on. If you notice the issue directly, you won’t have to blame anyone for why it has come to your attention. You’ve simply noticed it and therefore can comment on it directly. 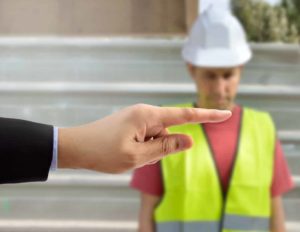 The third tip is to ask the informant for their desired remedy.

If someone brings something to your attention, ask, “What would you like me to do about this?”

If they are not willing to go on record and speak up against a coworker, then they are putting you in a difficult position. Unless they are willing to come forward, you will have to take the information as a tip, and wait to see it for yourself. Of course, that wouldn’t apply if it was a serious situation (theft, assault, harassment or bullying).

Once you can handle worker to worker accusations, keep people focused on their work, and observe what’s going on in the workplace, you can work on strengthening some of your other leadership attributes!