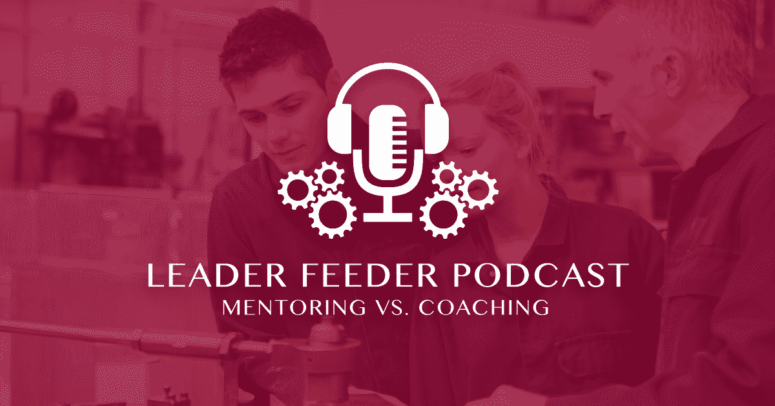 Contrary to popular belief, there’s a difference between coaching and mentoring. And you, as a front line leader, a supervisor or manager, need to know what it is.

Many organizations want to establish a “mentoring” culture so that employees can ask colleagues who have more experience and knowledge for advice that can help them along their career path.

Let’s first define mentoring. Mentoring is when an individual seeks advice from someone who has the knowledge that they’re looking for. This isn’t something that you can force. For example, if you were told that you have to get mentored by a certain individual, you may be resistant to the idea because you’re not seeking mentorship from the individual of your choice.

Even more importantly, most would look for a high level of openness and trustworthiness. Mentorship can open up certain details that require a level of trust. Someone in your organization could have all the achievements in the world, but if they aren’t trustworthy, they aren’t a good candidate for mentorship.

A third factor that determines whether someone is a good fit for a mentor is whether they’re available when needed. Someone who has a high degree of competence and trustworthiness can be very valuable, but if they’re often unavailable then they’re not a good mentor candidate.

Think about these points from a leadership perspective.

Are you somebody who displays competence as a leader, is trustworthy, and is available to speak to and mentor your staff? It’s something to think about.

Coaching is when a leader acknowledges that something within an employee’s process or attitude needs a shift, and proactively brings it to the employee’s attention.

There are still a few guidelines you need to follow in order to provide proper coaching.

First, be conversational in your approach. There’s no need to be overly heavy-handed or aggressive in your tone.

Second, be as specific as you can about what you observed and what you think would be a more effective approach.

Finally, look for and acknowledge the results when the person implements the change.

If you have an employee who accepts the feedback that you provide and implements it, then you’re going to continue to have a successful coaching relationship. If, after giving a number of coaching sessions, you find that the person isn’t progressing or acting on the information or generating the results that you expect, you might have to be more directive in your coaching approach.

Mentoring is a proactive approach where an employee chooses someone from within the organization for guidance. Coaching is generally initiated by the manager or supervisor to adjust certain behaviors.

Both can be extremely effective in boosting the performance of an employee, as well as the organization.

Based on your experience, what’s another distinction or similarity between coaching and mentorship? Let me know in the comments.