Put A Stop To Unwanted Chatter

What do you do when people take too much time socializing when they should be working?

It’s a tough situation because most people think a little bit of socializing is okay, it’s only when it gets carried away that it becomes a problem.

This is all based on the concept that a steady pace of work generally gets more work done than allowing idle time to consume work hours without producing anything. If people are talking while they’re working that’s okay. You just don’t want people not working while they’re talking, because that ends up actually hurting your production numbers. Idle time is really your biggest enemy from a production standpoint.

I have three tips to reduce excess socializing on your team.

Let’s say you go by a group of workers who are standing around talking. By itself, it’s not a terrible thing. However, when you come back again, five, seven, eight minutes later and they’re still standing there talking you might want to say, “Guys, we need to make sure we get back to work. We’ve got a busy day ahead.” You’re just making a comment. You’re not disciplining them. You’re observing and commenting on what you’re seeing. They might get in a little bit of a humph, but when they know all you expect them to do is to keep working, they’re going to be more successful.

The second tip is discussing the impact. Again, do this in a very conversational way. “Guys, I know you probably don’t like it when I come up to you and say, hey, we need to get back to work. I just need you to know those extra minutes we’re losing keeps us from hitting our production target. Some days we fall behind, so I’d rather us work at a steady pace. I’m not trying to be mean. I’m just trying to make sure you understand when we lose that time in production, it affects our numbers.” 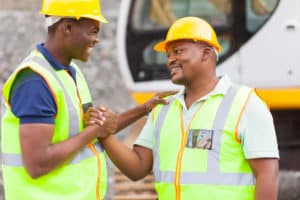 The third tip in dealing with excess socializing is to get a commitment to change. Any time you’re disciplining an employee or commenting on something, you’re really looking for a commitment to change. If it’s something that’s persistent, you’re probably going to turn it into a conversation, and at the end of that conversation you want that person to give you a commitment that says, “Okay, I will be more self-aware of how much time I spend talking to other people and I’ll make sure I cut those conversations shorter and stay working a little bit more.” That’s all you can really ask for as a leader.

Remember, the goal isn’t to shut down socializing altogether. It’s just to make sure it’s a reasonable amount and it doesn’t jeopardize your production numbers.